Notes from Mexico: On Being the Stranger 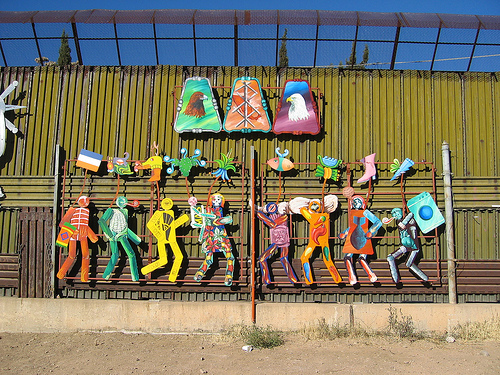 Wall art in Nogales, Sonora on the Mexican side of the border.

Sometimes when you roam the world, you meet a stranger and sometimes the stranger is you.

Dawn in San Miguel de Allende breaks with birdsong and rooster crow, the panasonic ringing of church bells and the clang! clang! of the garbage man ringing us all into another day full of the stuff of life. From my vantage point, looking out the bedroom window, past the baroque steeple of La Parroquia Cathedral peeking over the sleepy puebla and beyond to the dusty mountains in the distance sloping around the town in a gentle embrace, this is a fine day. In this strange place, among people who speak another language from another realm of the soul’s imagination, I feel oddly comforted.

But, of course, I have been here before. Not here but in Cuernavaca, the valley of eternal spring outside of Mexico City. I was 21 and blissfully naive on a mission to save the world by seeing the world. Looking back, it wasn’t such a bad plan. As Rick Steves, the travel guru, likes to say, “We travel to face our fears.”

A few weeks ago, those very words came back to haunt me as I stood at the luggage carousel in Leon, Mexico – our first stop on the way to San Miguel. Next to me was a burly Mexicano name Tomas who was going to take my husband and I to our hotel. Tomas was a complete stranger. He had engaged my husband in conversation as we were leaving the plane. “Please,” he offered upon learning that we were looking for a taxi, “allow me to take you to the hotel.”

I stood next to Tomas and every cartel story in my fear bank furiously waved red flags. DO NOT TAKE RIDES from strangers in strange lands where they regularly kidnap Americans. I struggled to be my mother’s daughter – polite with strangers – at the same time that I heard my mother’s voice, “Mary Byrne, what were you thinking!”

What I was thinking was that this was crazy but I wasn’t exactly sure what was crazy – my fear or my caution. So, I wobbled there in ambivalence and just kept talking to Tomas looking for a clue as my brain went bottom fishing for every stored shameless stereotype. Cartel or no cartel? He looked like a nice guy. Well, of course, he would. This was the prefect ruse, no? Look like a nice guy, act like a nice guy, have a wife and a daughter picking you up at the airport like a nice guy and then clinch it with the closer – tell the grey-haired gringos on their way to San Miguel (haven for ex-pat progressives) that you are a “Bernie Sanders man.”

There comes a moment. Always. You can count on it. It’s the moment when the “what ifs” that have been haunting your self-righteousness for years come looking for a pound of flesh. You know, those well-meaning disembodied intellectual probes of conscience that get tossed around among kindred spirits: What you would do if the person next to you in the elevator told a racist joke, or if you saw someone abuse a child in the supermarket, or if you had to decide whether to take a ride with a well-meaning stranger or hedge your bet and play safe and sound.

So, this a confession of sorts about what happened to me in that moment. I was terrified. Not because a stranger was offering us a ride but because the stranger was a Mexican in Mexico where terrible things happen. That is real. Ask any Mexican. The cartel has destroyed the fabric of Mexican political, economic and family life in many parts of the country. But the cartel is not Mexico. And I knew that. What is Mexico is “una gente muy amable” … a very kind people. And what I knew in my heart was that Tomas was a very typical Mexican. He was being “muy amable.”

In that moment, I had to make a decision: Do I let my fears spurn the kindness of strangers or do I roll the dice with my intuition and go for a ride? In the end, in the split-second before getting into the car I got my answer: I’d rather risk the illusion of my safety than protect the delusion of my fears. Sometimes, in the moment, it comes down to you just how you want to leave this world.

We got in the car with Tomas and his lovely wife and daughter. Guys in the front. Girls cozy in the back. We drove around Leon for an hour looking for our hotel. In the meantime, we talked politics (Who’s afraid of Donald Trump? Not the Mexicans!) and food and where to get the best shoes in Leon noted for “zapatos muy baratos but muy buenos”… great shoes at great prices. With every wrong turn, the “cartel disguised as a nice guy” bogeyman reared its ugly head. But, with every wrong turn, I also realised that Tomas, Gloria and Evelyn were intent, despite their own long day and now long night, out of a hospitality that is textured into their worldview, on delivering us to the hotel safe and sound.

It is weeks and many more stories later of the “muy amable gente” here in Mexico. At the same time, there are many stories from home about a not so very amable people who are issuing new deportation guidelines that are terrifying undocumented people – many from Mexico. Stories of immigrants not showing up for work, not getting necessary medicine, not taking their kids to school, not taking their kids to the doctor. Stories of thousands of people going underground in fear. Unlike my fear at the airport, theirs is very real because the “bad hombres” in DC are feeding the dark imagination of a very vocal populace who want a culture cleanse. 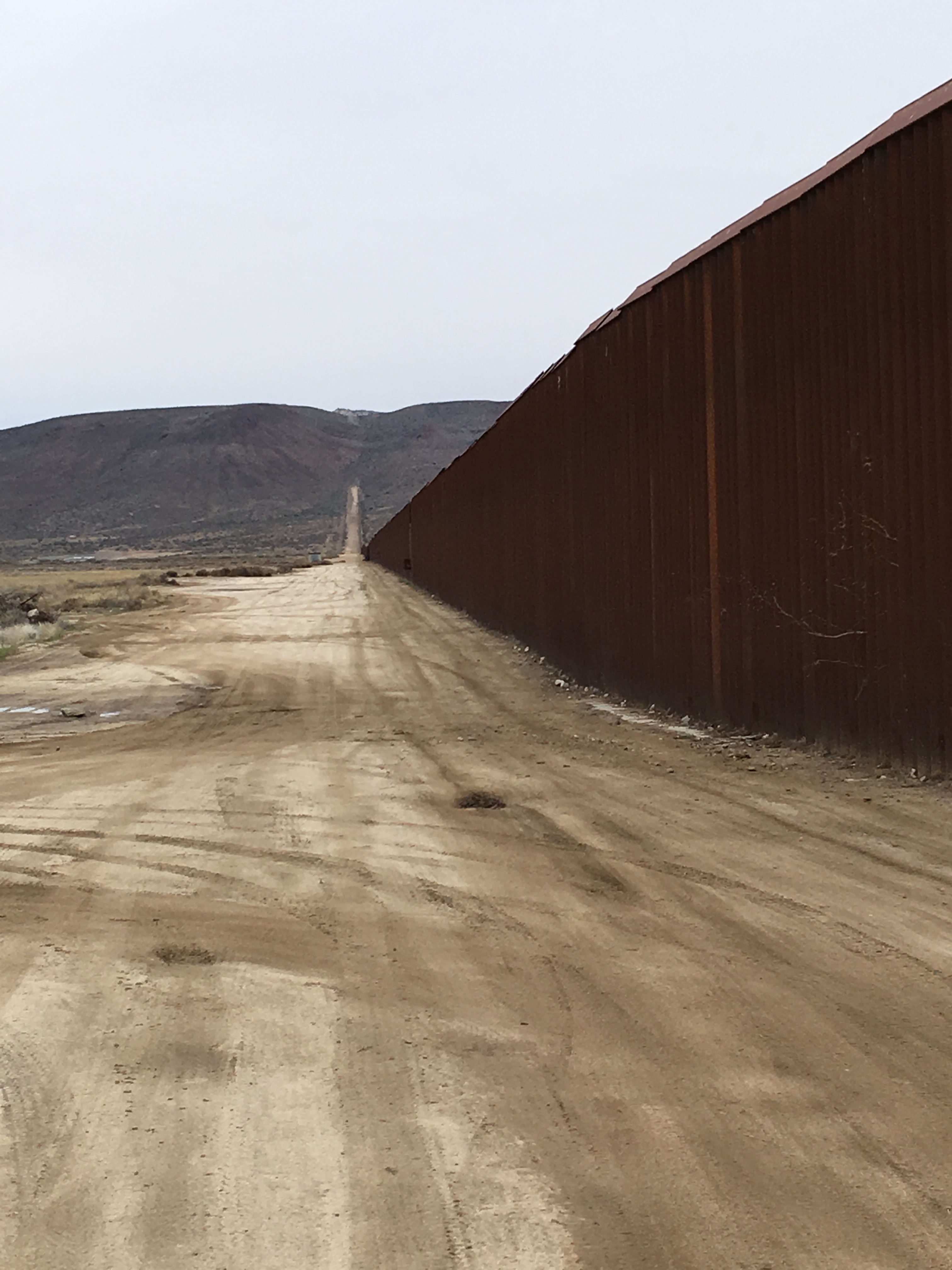 Notes on the photos: If walls could talk, what would they say? Well, in Mexico (as seen in the photo at the top of the page), the walls talk, and sing and explode in poetry and colour and hope. In the US (as seen in the photo above), miles of drab brown fencing along the southern California border speak to a blighted, inhospitable land barren of spirit. 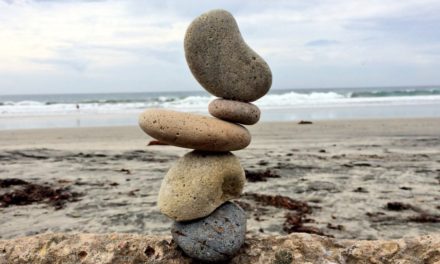 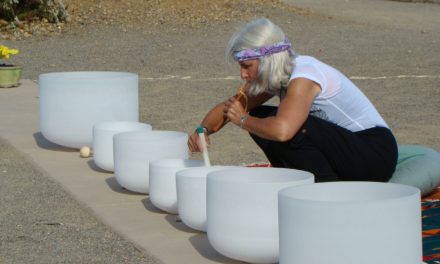 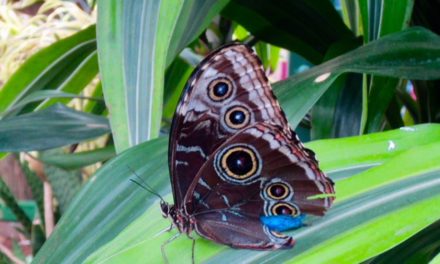 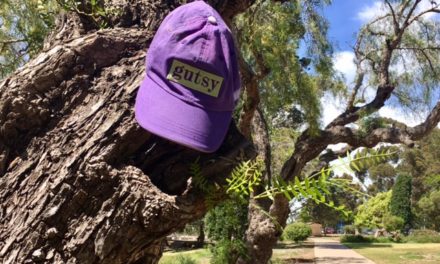 Why Women Need a Tribe